Hello, and welcome to KT Made It, where I share my favorite dinners, desserts and more! I love trying out new recipes, and finding ways to make them healthier & happier on the hips.

Hope you find some you can enjoy too! 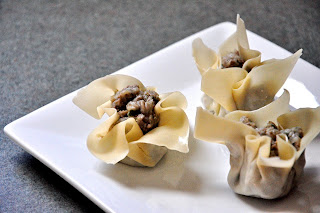 My sweet friend, Anissa, served these as an appetizer at Thanksgiving dinner and it was love at first bite! They're so delicious and relatively easy to make, (and they look so irresistible on the platter, don't they!?). Just a teensy bit time consuming . . . but I promise, they're so worth the extra time and effort!

Directions:
1. Combine the first 10 ingredients in a saucepan. Bring to a boil over medium heat, stirring occasionally. Reduce heat; simmer 8 minutes, or until potato is done, stirring occasionally. Remove from heat and set aside to cool.
2. Preheat oven to 400°. Place 2 baking sheets in oven for about 10 minutes.
3. Drain meat mixture into a colander over a glass bowl. Discard liquid. Finely chop meat mixture with a knife, or place in a food processor, and pulse 2 times or until finely chopped.
4. Working with one won ton wrapper at a time (cover the remaining won ton wrappers with a damp towel to keep them from drying), spoon 1 Tbsp beef mixture into center of each wrapper. Fold up the sides (see photo above) and place them on a wire rack. Repeat the procedure with the remaining beef mixture and won ton wrappers.
5. Remove the baking sheets from the oven and coat with cooking spray. Arrange the empanadas in a single layer on baking sheets. Coat the empanadas with cooking spray. Bake at 400° for 8 minutes or until golden brown, turning once. Garnish with cilantro, if desired.

Recipe borrowed from Cooking Light Magazine - found on www.myrecipes.com
Posted by OSHEA DESIGNS, LLC. at 12:00 AM

If you'd like to see more recipes, click on the "older posts" link on the bottom right side of the blog!